I have lived and worked in and around the communities of North East London for over fifteen years.  As a teacher, journalist, youth justice caseworker and Labour & UNISON activist, I’m keenly aware of how current Government policy is impacting locally on jobs, community policing, local business, transport costs, housing, education and health care. In particular, the threatened cuts to NHS services have promoted a collective anxiety that has to be further addressed along with the raft of Coalition cuts hitting working families and the most vulnerable hardest.

If we care about the progressive strides made by Labour in improving living standards and ensuring society is more equal, we must ensure we return a Labour Regional & National Government and reinstate Labour’s legacy. As your Labour candidate I will work with and for you, alongside Party & Union, relentless in our joint ambition to build a better Britain and foster a One Nation community that cares.

A hard-working London Assembly candidate in 2012 I showed the Tories & Lib Dems we mean business. I led the local party to a staggering moral victory – reducing the Tory majority from 40,000 to just 4000 in a key heartland constituency. Narrowly missing out on taking the seat we won 49,000 votes to their 53,000. Just 2% in it!

Our groundbreaking campaign was hard fought by championing the concerns, visions and aspirations for the constituency and by providing voters with a credible alternative to the staid and unrepresentative political slate typically on offer. The knowledge, skills and techniques I employed will serve to inform my parliamentary campaign. I will continue to be a catalyst for community campaigning, encouraging more cross-cultural engagement within our Jewish, Cypriot, Muslim & African Caribbean communities. Enlisting all our members and supporters to fight on in our bid to protect and strengthen community policing, promote regeneration and social enterprise, working towards real community cohesion by building trust and engaging young people as well as disenfranchised voters through inclusive politics. 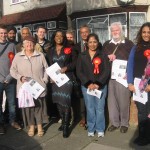 Experienced, energetic and committed, I’m passionate about winning for Labour, for London, for you!